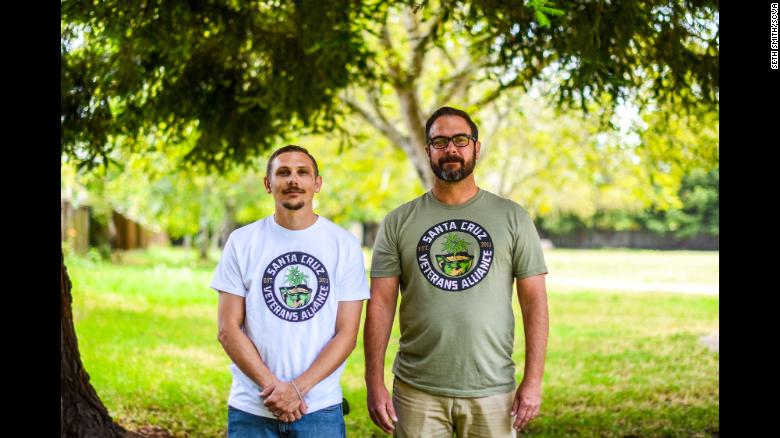 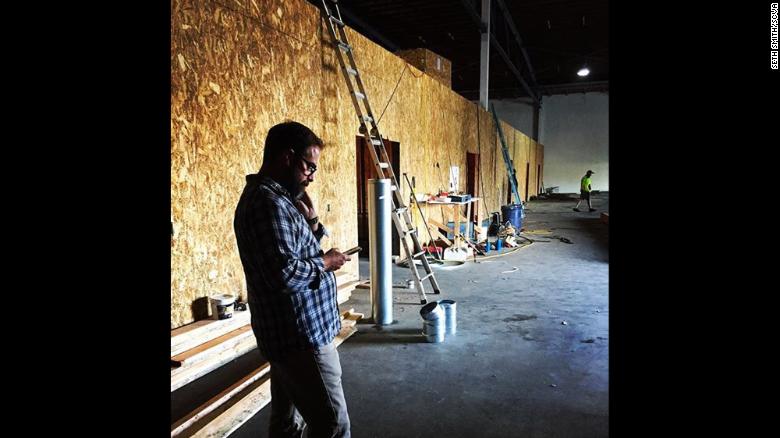 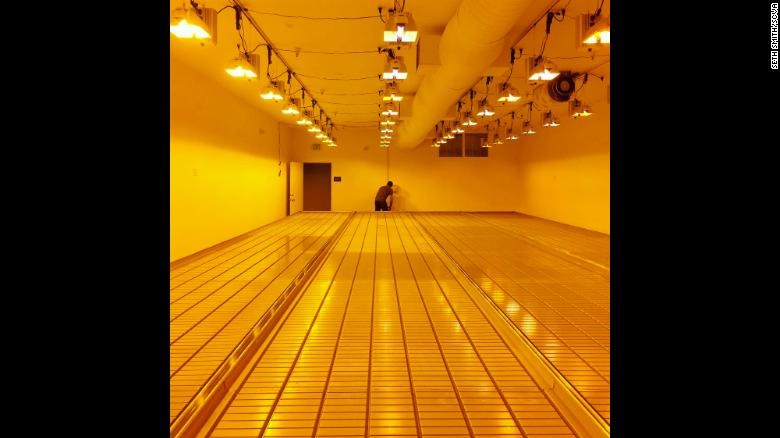 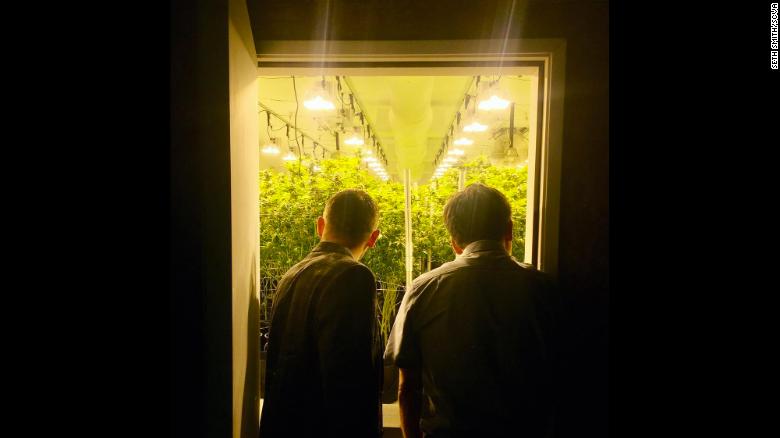 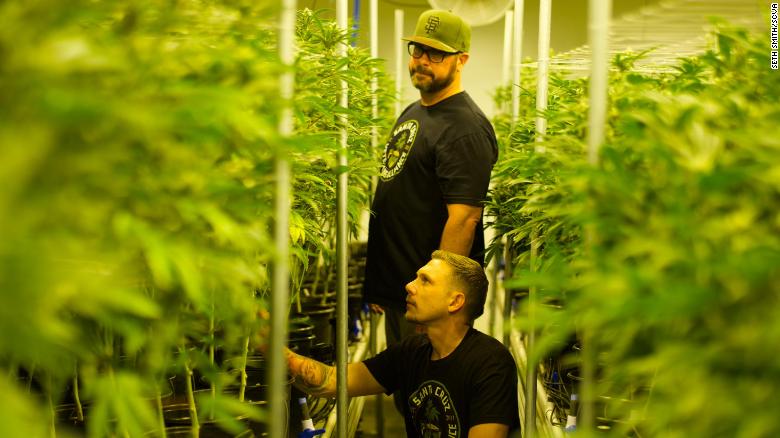 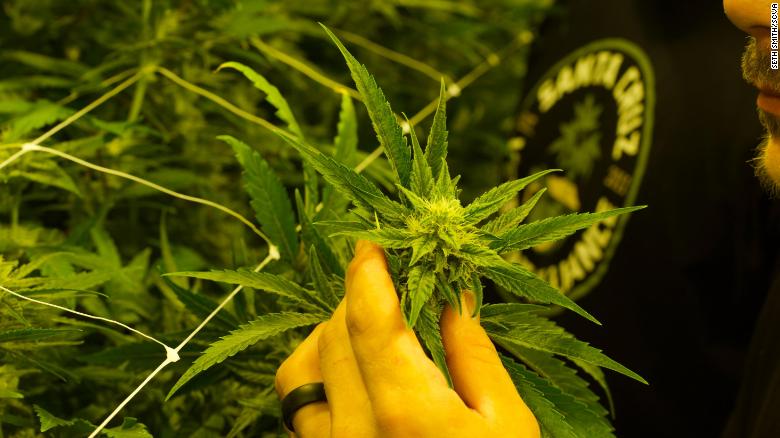 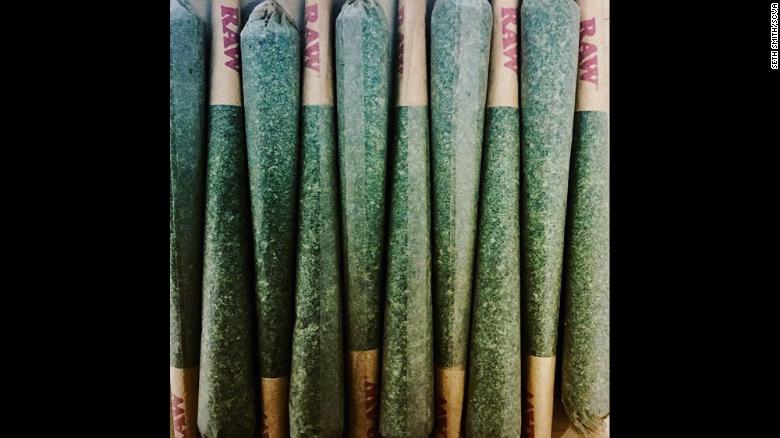 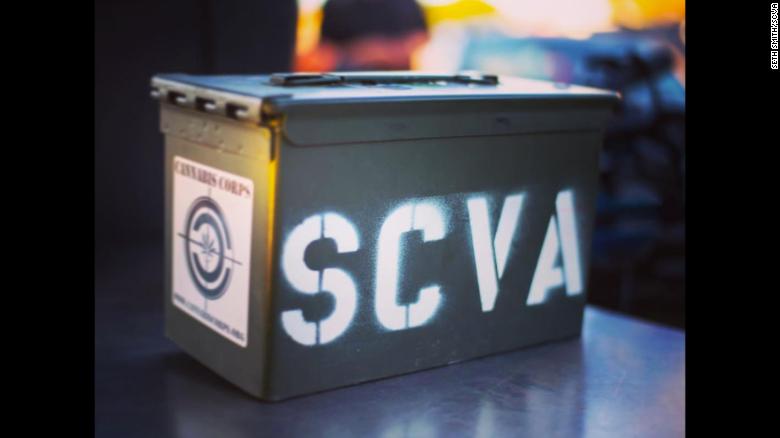 (CNN)To get away from the memories of war in Afghanistan -- the violence, the unexpected danger, the rush of adrenaline and the hypervigilance that can come with post-traumatic stress disorder -- Aaron Newsomstarted gardening.

Since World War II, generations of veterans have found healing in horticulture. Digging in the dirt did that for Newsom, but the Marine, who served in an attack helicopter squadron, wanted more. He wanted to share this healing feeling with service members who may never even touch a spade, and he had an idea.In addition to the public gardening he was doing in Santa Cruz County, California, Newsom kept a secret garden in his home. "I grew medical cannabis for myself in my spare bedroom. I didn't tell anyone for at least a year," he said. "When I finally told my mom and dad, with my dad being so conservative, I thought they'd freak out, but they were both totally supportive, because I was growing it for the right reasons."

Newsom, 35, felt that the plant was a good replacement for the opioids and other drugs the Department of Veterans Affairs doctors put him on for PTSD and severe arthritis. "On those drugs, it wasn't the quality of life that I wanted," Newsom said. "With medical cannabis, I had such great success. I could regulate myself and my hypervigilance, and I was able to get off those other pills."A friend he met through the nonprofit Farmer Veteran Coalition, fellow veteran Jason Sweatt, shared an enthusiasm for cannabis. When the two met Vietnam veterans hanging out at the VFW, it sparked an idea. Some of the veterans were disabled, and though they also felt that cannabis could help deal with their health issues, most had limited income."Cannabis is quite expensive, so we knew we could help them out: giving them what we grew," Newsom said. "And then they told friends who were vets, who told their friends who were vets, and it grew from there."

In 2011, after Newsom had gone back to Cabrillo College to finish a degree in horticulture science, he and Sweatt made their giveaway official, creating the Santa Cruz Veterans Alliance. Today, members of the alliance grow marijuana, process it and sell it at the group's successful dispensaries. Ten percent of everything it cultivates goes to its Veteran Compassion Program, which offers free weed to veterans who have a doctors' recommendation. (Doctors can only make a recommendation and aren't allowed to prescribe cannabis or cannabis/hemp derived CBD products because they are illegal according to federal law.)

The alliance is working on its 12th California dispensary license. It says it's been able to help about 800 vets through the giveaway program. It also employs them in positions such as cultivation, processing and sales; 95% of the veterans it's hired are on service-connected disability.

Their group is part of a unique movement of vets who are trying to help themselves get through the challenges that come with going to war and living with the consequences.

Veterans disproportionately struggle with mental problems and chronic pain, studies show, and the majority of veterans who have been surveyed say they'd like medical cannabis to be a federally legal treatment option.

In the absence of that option, counseling works for some. Doctors prescribe a mix of opioids and psychotropics for others. But the drugs don't always work or, in some cases, make problems worse. Veterans are 10 times more likely to abuse opioids than the general population, according to former VA secretary Robert McDonald.

Roughly 20 veterans kill themselves each day, 2016 VA research found, and there's emerging evidence of a link to chronic pain. Increasing doses of opioids was also tied to increased suicide risk for veterans, according to a study.

Many vets see medical marijuana as a viable option, and the science, while limited, is starting to show promise in combating nerve pain. Researchers are also looking into its impact on PTSDand chronic pain. But some vets don't want to wait for clinical trials. About 22% now use cannabis to treat physical or mental conditions, according to a recent American Legion survey.

However, the VA cannot advise vets to try medical marijuana, nor can it help them get it because it's federally prohibited.

Vets also have to pay for it out of pocket, even in states like California where medical marijuana has been legal for more than two decades. At the federal level, it's illegal and listed as a Schedule I drug, considered to have no medical value, meaning it's not covered by veterans benefits or regular insurance.

It probably won't be covered any time soon. Attorney General Jeff Sessions has shown a dislikeof the drug. The most recent head of the VA, Dr. David Shulkin, said during last year's State of the VA speech that "there may be some evidence that (medical marijuana) is beginning to be helpful," but he was recently fired.

In the absence of federal action, veterans in this grass-roots movement act with urgency.

"We all have friends or family who we have lost to suicide or opioid addiction and can't wait for other help anymore," said Seth Smith, a veteran and colleague of Newsom's at the Santa Cruz Veterans Alliance. "Vets are uniquely suited for this. We are accustomed to operating in the gray areas, and cannabis is a big gray area still, although it is starting to become more mainstream. "This is Santa Cruz, surf city. We are used to riding waves out here," he said.

Other programs include Weed for Warriors and Hero Grown, which advocates for access and acceptance of medical marijuana. Hero Grown also does giveaways in Colorado and has a national program that ships hemp cannabidiol products to vets and first responders across the nation. Cannabidiol, or CBD, is one of the active ingredients in marijuana and is increasingly thought to have wide-ranging health benefits. Veterans Cannabis Group provides free weed for vets and employs them as security for medical marijuana providers. Other foundations are raising money for clinical trials.

At the Santa Cruz Veterans Alliance, visible proof of how welcome the mission is comes on the first Monday of every month, when more than a hundred people typically line up at the Santa Cruz Live Oak Grange No. 503, a local gathering hall. Showing proof of service, a doctor's recommendation, and a valid California ID, each gets a voucher for free weed from the group's dispensaries and a lot more.

The monthly meetings have become a fixture for veterans of the Gulf War, Iraq, Afghanistan, Vietnam and even Korea and World War II. The alliance also brings in groups to talk about other services veterans may need, such as housing, employment assistance and health care.

Smith thinks their mission is vital. "We hope to keep (the marijuana efforts) all sustainable at least until the VA can prescribe it," he said. "Everyone comes to find relief from everything from anxiety and depression, the PTSD, the lack of sleep and chronic pain, to get over opioid addiction. We've seen it all."

After getting vouchers, veterans stay to talk about their wars, the challenges of everyday life and cannabis itself.

Jai Kadilak, who did tank duty in the Gulf War, has been attending meetings for the past three years. Cannabis has made him feel whole, he said, and the meeting brought back the familiar camaraderie of the war.

"I met a woman there who said her husband never leaves the house except for this one meeting, and they drive in from hours away," Kadilak said.

Attendees share information unavailable at the VA. They talk about what marijuana strains work best to help sleep or to ease anxiety. There's advice about edibles and cooking. One man turns cannabis juice into frozen cubes. Others talk about what to take if they don't want to get high.

Kadilak feels that cannabis is a better option than the "mess of pills" or "combat cocktail" of antipsychotics and opioids the VA put him on when he returned from combat. "I didn't feel good. I didn't feel bad. It was like I was just existing," he said.

Like a lot of guys he knew, Kadilak self-medicated with "quite a bit of beer on a daily basis," which he knew was dangerous. "It really was rolling the dice with alcohol and pills, and it was a negative result," he said. Now, as he advocates for compassionate use for other veterans, "there is no doubt about it: This is something that works, and it just can't go away. It can't."

Socrates Rosenfeld agrees. The 36-year-old, who works in the cannabis industry, as CEO of Jane Technologies, an online cannabis marketplace, has also been going to the Santa Cruz Veterans Alliance meetings for the past year and a half.

Growing up, Rosenfeld said, he was as clean-cut as it comes. A West Point grad, an MIT student and an Apache helicopter pilot, he felt like he accomplished a lot, but when he got back from Iraq, the transition to civilian life was challenging.

"You get used to operating at a certain level of intensity over there, with life or death decisions at every turn," he said. "It's hard to turn down the volume and live as a civilian sometimes.

"Rosenfeld said he had never touched cannabis before but felt that he had to do something.

"It's like this thought carousel kept going around and around, and I couldn't find any way to be present in the moment," he said.

Cannabis brought calm. "I wouldn't take an opioid, as the doctors recommended. I didn't want to feel like a zombie, but cannabis, this brought me a sense of balance, a connectedness to nature and to my loved ones and to myself."

The Santa Cruz Veterans Alliance meetings have also brought him a connection to other vets who sometimes struggle with the stigma that comes with using marijuana.

"I think that is why SCVA has done such a great job. Being in the group, they are essentially saying, 'you don't have to be ashamed or worried about using this. You can find a way to treat whatever you are experiencing in a peaceful, natural and healing way,' " Rosenfeld said. "For the veterans' community that goes through so much, this is really beautiful, and I hope other people learn about it. It's not just about smoking a joint on 4/20. It's about accessing a way to heal."